It's prom season again! I'm going to provide a few insights on photographing couples for prom "on the fly!" 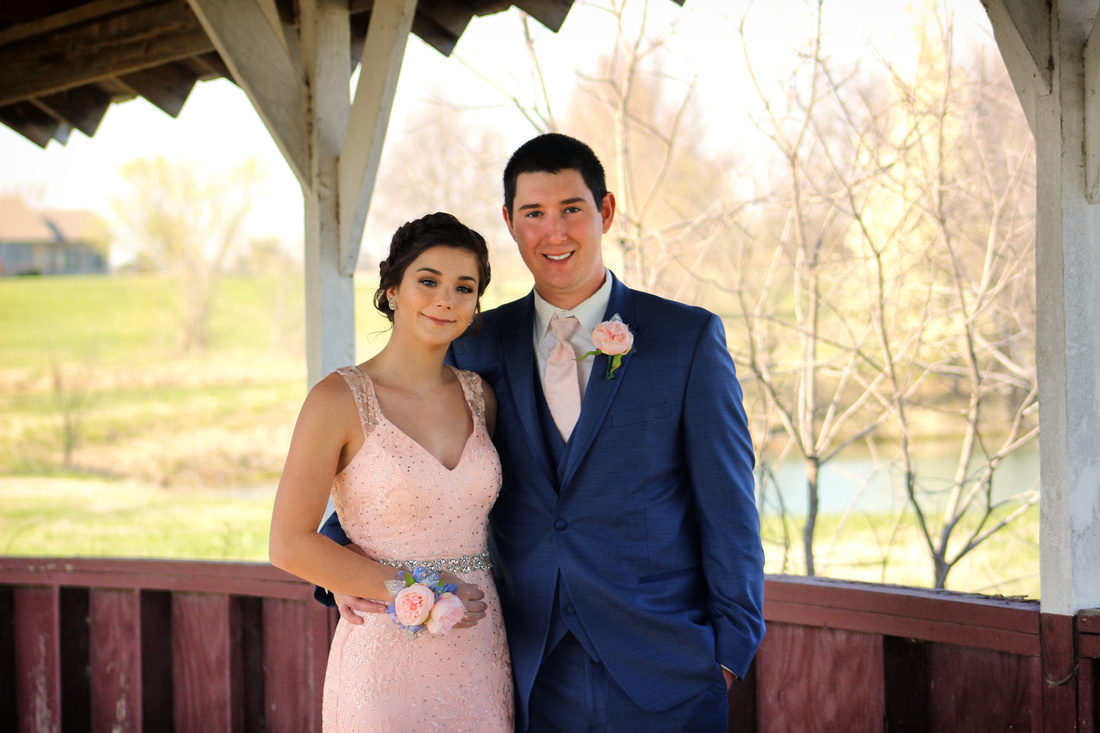 I'll start with this one first. Why? Because I like it, but it provides some insight into what kind of photos people tend to like. It's a beautiful shot in a beautiful location, but the expressions on my subjects' faces are fairly standard. They aren't "genuine," if you will. I did some research via Facebook to see which of my photos from yesterday received the most reactions - this one got very few.

There are several factors that went into making this photo. 1) I had my zoom lens on but it was a tight location, so my shots were limited. 2) I had my subjects stand in the shady portion of this bridge so that there were no hot spots on them from the sun. This gave them a very even lighting and their features are very clear. Every detail is accounted for, except the bottom of Andrea's beautiful dress. 3) We were at the location for a matter of minutes, so I got a few quick shots in and then the happy couple had to leave to get pictures taken inside at the high school. I had to say bye to this fantastic location much too soon! Things like this generally happen because even when planned, days like this tend to go quickly and have a few time-consuming hangups. And in this case, I was asked to photograph them the day before and scheduling was a bit off due to some misunderstandings about timing. When you're the photographer, there's not much you can do about that except adapt and make something work!

All in all, I ended up with a photo that will be great to keep as a memory of how the two looked on this day, but one that shows little or no emotion. I love this photo, but there IS more you can capture in a photo than just how two people look. Let's look at one that inspires almost everyone to smile when they see it. 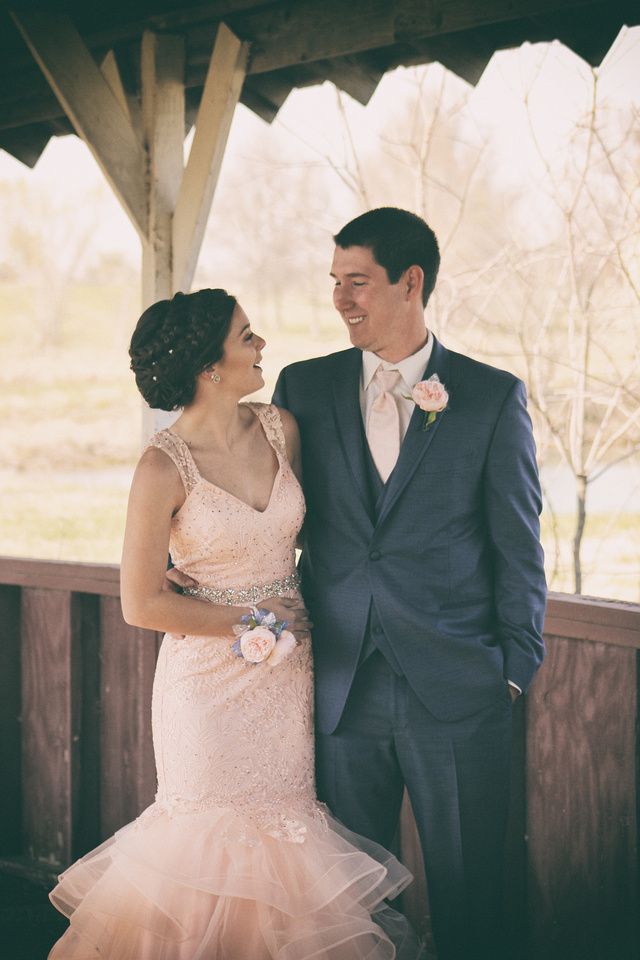 Now THIS one made people smile. It's pretty obvious why - I've captured a special moment between two people, and it's a happy one. The emotion is there, the smiles are real, and the focus is all on the subjects. I captured this one in portrait, so more of Andrea's dress is visible as well. With some specialized editing, this one looks like a dream. And that's the whole goal of high school prom!

Now keep in mind, I DID have to instruct these two to take a moment to look at each other before I could capture this photo. You will probably have to do the same, unless you are photographing a model with training or strong natural knowledge of modeling (which does happen sometimes). Learning to take initiative and be a bit bossy as a photographer is a huge benefit, though it doesn't come naturally for most introverts like myself. Practicing with relatives or friends may help you overcome shyness when it comes to being a photographer. 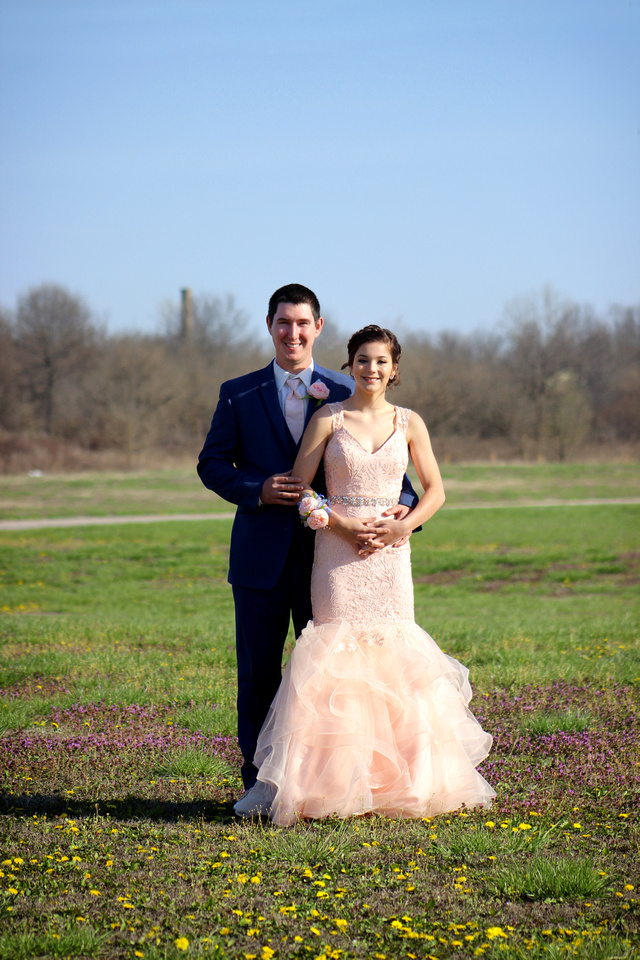 This one is the product of having a not-so-great location and making it work. Yes, those are dandelions and honeysuckles, not a curated garden, but the bright green grass and spring colors, along with the plain background and blue skies provide a pretty location to snap a full-body shot of the couple. I did not have the option of placing my subjects in the shade this time, so there was the harsh, early evening lighting to deal with. This one was taken outside in an open field right next to the high school. It features genuine smiles, beautiful, bright color, and is a very nice shot of these two overall! 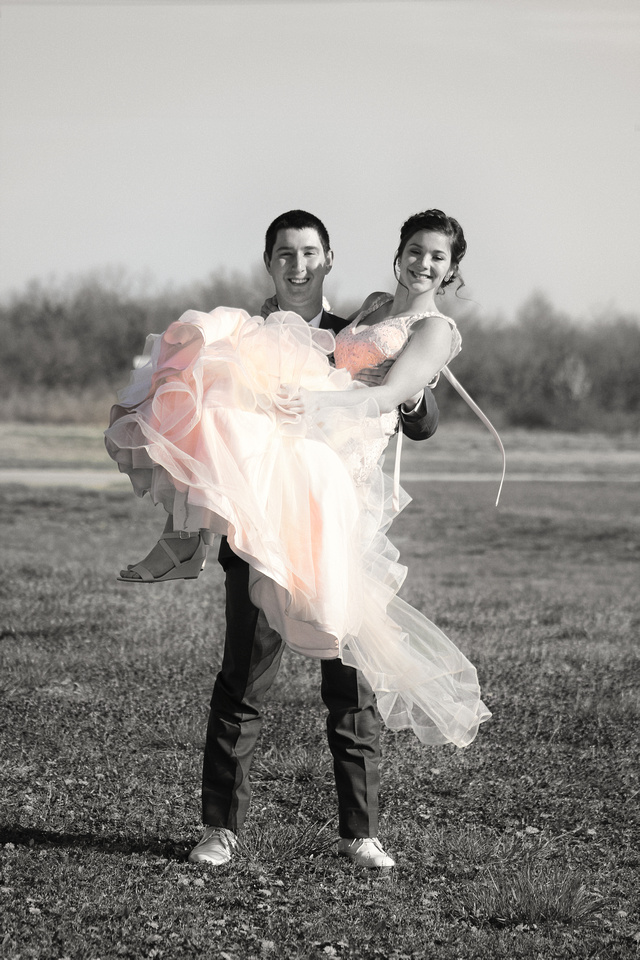 THIS one was a favorite of "the people" as well. I think this is, again, due to genuine smiles and the fact that I captured a happy, real moment, with the addition of some interesting editing. Part of the reason I kept the color in Andrea's dress is that it looks so much like a wedding picture anyway, that leaving the dress in a sepia tone made it look like a straight up wedding photo without question. Otherwise, I do like the pretty pop of color that this gives the photo. And again, it makes the focus of the picture the subjects rather than the surrounding foliage and background.

I hope that this commentary from me might help you when capturing your own loved ones! Thank you to Dustin and Andrea for being featured in this blog post!